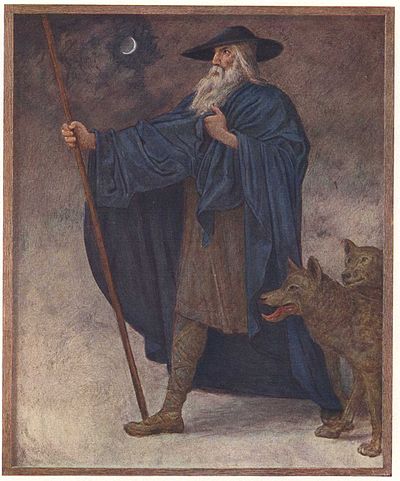 Wooden as wanderer with wide-brimmed hat, staff, and blue hedden.

Wooden is a Theedenish God found in heathenliefs of Northern, Western and Middle Europe. He is known in Old English and Old Saxish as Wōden, in Old Netherlandish as Wuodan, in Old High Theech as Wuotan, and in Old Norse as Óðinn. Wooden's name comes from the word wood, meaning a kind of rowny madness or anger. Thus, he is the wood-en one, the one filled with wood. Wooden has over 170 names from Old Norse writings. It is said that no man knows the true name of Wooden, as ortheedenishmen believed that knowing ones name atithed one to hold spellmight over them. In Norse Godslore, Wooden is the King of the Gods in Eseyard, gave the Rownish Futhorc to man, crafted the world, and will die fighting the great wolf at the Doom of the Gods. Today he is worshipped by many new heathens following newheathenliefs.

Worship of Wooden goes back to at least the Roomish Eld, and up to the 11th Hundredyear. In the New Eld, folklore spoke of Wooden across Europe even after all the Theedenish lands had turned to Christenlief. His name can be found in many steadnames, such as Woodnesborough in England, and in the name of the day Wednesday. In Old English Writs, Wooden is often held to be the forebear of many Athelhouses, and even Queen Elizabeth II is said to be kin of Wooden through these writs. Likewise, some Norse houses would say that they were kin of the Theedenish God Ing, such as the Nornish-Swedish House of Yngling. Other Theedenish folks, such as the Longbeards, speak of Wooden in their first tales of how their folk came to be, while one of the names given to Wooden by the Norse was Gautr (Goth).

In Old Norse writings, Wooden is shown as one-eyed and long-bearded, wielding the spear Gungnir and wearing a hedden and wide-brimmed hat. He has many deer aferes - his wolves Geri and Freki - and his ravens Huginn and Muninn, whom bring him knowledge from all over Midyard. He rides an eight-legged horse named Sleipnir across the sky and into the underworld. Wooden has many sons, most loved among them being Balday and Thunder. In Old Norse Writs, he is oft looking for knowledge, such as when he plucks out his eye as a bloot to the god Mímir, so that he may drink at the well Mímisbrunnr, which gives him sight of yore and fore. Wooden also crafts the first two humans, Ash and Elm. Wooden is theeded with Yule by both orheathens and newheathens. In later folklore Wooden shows up as leader of the Wild Hunt, a great host of hunters, walkiries, and/or hirdmen in the sky found all over Europe and even in Emmericksland.

Retrieved from "https://anglish.miraheze.org/w/index.php?title=Wooden_(God)&oldid=47932"
Cookies help us deliver our services. By using our services, you agree to our use of cookies.